As those who have been following our story will be only too aware, the deadline has now passed and Sol has set off on the first leg of the journey, but what happened following the last video instalment?

Work continued at an ever gathering pace to get Sol to a point where the car was ready to go to be trimmed, this involved making and fitting a wiring harness, made by The Wiring Harness Company just a few miles from our Bromyard Workshop, collecting and installing both a fuel tank and a radiator and ensuring that anything needing fitting or drilling both under and indeed on top of trim had been drilled. One item that roved a bit of a challenge at this point was a mounting bar for the seat belts – the car being fitted with 4 point competition type harnesses – as this has to be fitted to the rear wheel arch, but of course, there was no trim on the wheel arches, so after a couple of discussions with the trimmer, a suitable gap was left and holes drilled!

Sol was now ready to go to Custom Coach Trimming, again a local company, run by an ex-Morgan Factory Trimmer who set about the interior, making door cards, wheel arch tops and sides, a gearbox cover and sundry other bits and bobs. Custom Coach Trimming was also going to make a hood, but this was to come at a later date.

Once trimmed, the car returned to the Holden Workshop and work pressed on to get it all together. The braking system pipework was checked over before being filled with fluid and the air bled out of it, providing us with a fully functioning braking system. Once this was done, the front wings were fitted and the lights wired up and tested. Finally, at the front, the cowl was added and the bonnet fitted to line the cowl up correctly. The bonnet was then removed to allow for better access to the mechanicals. Correct water hoses and an exhaust silencer together with a tailpipe were all sourced from Melvyn Rutter. Our local Motor Factor was able to source a length of flexible exhaust pipe, which was used to connect the manifold to the silencer, in order to offer an amount of movement to the exhaust and remove any stresses that may come from rougher roads.

At this point, Sol went back to Custom Coach Trimming for the hood and side screens to be fitted. Here we discovered that the windscreen was fitted at the incorrect angle, so had to make a hurried correction, thus enabling the use of standard Morgan side screens, a decision which saved time and the need for a custom made set! It soon became clear that the original pattern hood frame would not work with the addition of the rollover bar, so this was put to one side – it will be used for the Interim +4 project that is in the Workshop as the hood frame for this has all but returned to nature! Meanwhile, a more modern Morgan hood frame was modified to fit, providing enough support for the hood and giving a line that was pleasing to the eye from the side, whilst also being able to offer enough headroom inside.

Once the car returned to the Holden Workshop, engine, gearbox and axle oil was added, together with water to allow us to start the engine. Loose ends of wiring and pipework were clipped up safely out of the way and tidied up whilst the fluids settled in. A small drip of oil became evident under the engine – difficult to see as it was beautifully clean – seemingly coming from the sump plug and dripping on to the sump guard that had been fitted. Applying a spanner revealed the plug to be tight. Careful inspection of the sump pan, having removed the now slightly oily sump guard showed a dent, possibly from an impact at some point, or an over enthusiastic mechanic jacking the car up under the sump, which was leaking! This was deemed to be somewhat less than ideal and all the clean oil was hurriedly drained out! The sump pan, once removed, revealed a small crack inside that had gone unnoticed. Fortunately, the sump from the TR2 engine that is destined for the Interim car was on the shelf, having been cleaned ready for the engine build at a future date, so this was commandeered, fitted and refilled. No more leaking!

Now we could finally start the engine! After spinning the engine over without plugs to obtain oil pressure and roughly setting the ignition timing, plug was refitted, leads connected in the correct order and the fuel system primed. Happily, we were soon making noise and filling the Workshop with the smells of a freshly built engine running for the first time!

As the hour was advancing and progress was good – it ran and sounded really good, was all together and would be driveable in the morning – it was time for home. Arrival the next morning, however, was a bit of a low, as the contents of the radiator were found on the Workshop floor! The water pump it seemed, was leaking from the gland seal within. Hurried phone calls were made to Moss Europe to try to locate a TR water pump. Our nearest proved to be in Bristol, so Charlotte sallied forth to go and get it. A chance phone call with a colleague, who as it turned out was in Bristol and a mere 5 minutes away from the Moss premises helped a great deal, and the 2 were able to meet at half distance and exchange parts. By lunchtime the new pump was installed and the front end of the car going back together. All we had to remove was the radiator and front cowl box, the outer panel staying in place!

So, all back together and holding fluids, Sol was removed from the ramp and set on the nice flat Workshop floor to set the front wheel alignment and adjust the ride height on the front suspension. With this done, it was time for a drive around the yard. It seemed to be ok, although adjustment to the clutch was required as it slipped a little, and some ignition and carburettor tuning was required. With this done, we set off firstly around the yard, then up the service road around Linton Trading Estate, and after a few further adjustments, a trip up the road! The clutch required a little more adjustment and a few carburettor tweaks before a bigger journey, from Bromyard, along the main A44 towards Worcester and around a favourite and testing route. Those familiar with the area will have heard of Ankerdine Hill, used years ago as a hill climb course and a real test for an engine’s state of tune. Although going gently as the engine was fresh, it pulled well and reached the top with ease.

Adjustments to the front dampers improved the handling characteristics greatly and the journey back to the Workshop ended with a broad grin and a feeling of great satisfaction that all worked well and was getting better with every mile.

After a thorough check over and a few more little adjustments, further and longer journeys over Herefordshire Roads were covered, before loading Sol with the kit that had been put ready, the last minute realisation that the fire extinguisher needed permanently bolting in, before the journey to the shipping company who was handling the first ‘leg’ of the adventure.

You can Read more about our Rally Around Africa here

Last night I encountered a “that’s not very good” moment. The last 2 bits to strip from inside…

As the weekend continued, so progress on the car disassembly took leaps forwards, due in part to the… 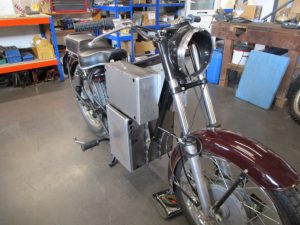 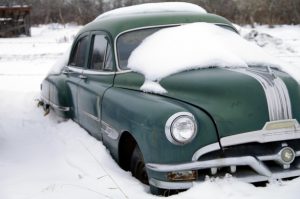 Prepare your classic car for the winter
Menu