I first saw “Lady D”, an Armstrong Siddeley 20/25 Salmons Tickford Cabriolet in a Pre War Car.com ad on the internet, and thought she looked pretty good, but I was mid-way through purchasing a 1930’s Lanchester cabriolet – or so I thought. Frustratingly, that car was sold from under me the day before I was due to drive up to the North to buy it. The custodian “had forgotten” about me. Best not to ask about it!
So I looked again at Lady D, she was for sale by its owner in Gernsbach, a village in Germany’s Black Forest.

I looked upon the map where Gernsbach is (near Baden Baden) and found that I could get there and back in a long day from Gatwick by flying into Stuttgart and taking a bus to Karlsruhe where the owner, Erwin Blohmer said would pick me up. So, in October, that’s what I did. Long story short, I had a good day there, got on well with Erwin, and his wife, Vicky, loved the car, which looked BIG! and we shook hands on a deal.
Back at home, after watching the exchange rate with a sinking heart I became an expert in its minor ups and downs and pressed the button on what seemed to be the best rate I was likely to get (in between various Brexit scares and other crises, real and imagined). Erwin confirmed the money had arrived in his account and I said a prayer to ensure he didn’t move home and disappear before I could go and get the car (only kidding, Erwin).
I decided to drive Lady D home. After all, it is only about 600 miles and the car is only 81 years old and it is only November, and who needs a heater anyway. And by the way, how does a Wilson pre-selector gearbox work?
A big but short debate with myself about whether to take the scenic route home, roughly following the Belgian border to the tunnel, was cut short when I realised how long that was likely to take and how cold it could be and I opted for the more sensible motorway all the way, allowing for a day and a half.
I repeated my Stuttgart flight but this time took what I might need if we broke down in the shape of Jon Dudley, a classic car man, who I thought might have half an idea how to fix things if they went wrong,

because of course, we couldn’t take any heavy tools in our hand-baggage, or any other useful supplies such as petrol additive for the unleaded fuel. To comply with the law, however, I did take a breathalyser kit, triangle, and a spare light bulb (but not one that would necessarily fit an Armstrong Siddeley).
Work commitments meant that we couldn’t fly until afternoon and we ended up arriving at our B&B in picturesque Gernsbach at about 11:00 pm to find that the whole village, including our B&B, was silent and dark (“the key is in your door, let yourself in, Herr Dennison”), so no dinner or celebratory drink and nothing for it but to go to bed, something of an anti-climax at the start of our adventure.
The next day was BUSY.

I don’t know if you have ever tried to transfer ownership of a car in Germany – but if you haven’t – It is very efficient, but there are lots and lots of paper and formality that involves about three hours and three different offices, one to register the sale, where authority is given to have your own German plates made up and where, from a different counter, you buy insurance, a visit to the number plate maker who produces your plates, a return to a different counter in the tax office where your plates are authorised, then an inspection of the car (well, a teenage girl came and looked at it and agreed that it was a car and was indeed very nice looking). I may be wrong about all of this, mind, because the whole process was of course conducted in German, with Erwin taking charge and telling me when to produce my passport, when to pay (several times) and when to say “Danke” (many times).
And in case you are wondering, no – you can’t just insure it with a UK insurance company and drive it home on its German plates. Believe me, I tried! It seems to be an area that EU harmonisation hasn’t reached.
All done by lunchtime, which was spent back with Erwin and Vicky enjoying a home-cooked meal and a (small) beer. Erwin had kindly assembled a small toolkit for us, including the required fuel additive, and we were on the road by 2:00 pm when I started to learn all about Mr. Wilson’s pre-selector gearbox, that you can’t actually see anything behind you when driving an Armstrong Siddeley Salmons Tickford cabriolet and that it doesn’t turn left as well as it turns right (apparently, it’s adjustable!).
Luckily (I had checked), the car has a PowerPoint so I was able to follow a pre-plotted route using my satnav brought from home. It worked brilliantly well and we arrived at our halfway hotel near a motorway junction at Metz at dusk, feeling mightily proud of ourselves. The car performed perfectly but thirstily (well what do you expect from a 3.7-liter engine from 1936?). A steak dinner and two bottles of red wine went down very well (it wasn’t only the car that was thirsty) and these were followed by a good night’s sleep.

Day two through France was equally uneventful and we made it to the tunnel without incident, putting the car in the truck section due to its height. We arrived back at Folkestone just in time to catch the evening rush hour in the dark, and impressive looking as they are, the P100 headlamps are not actually any use at lighting the way. Combined with the poor rearview and the 1930’s steering being more akin to an ocean liner than a car, there were a few exciting moments on the M25!

We arrived back home at Cherry Tree Cottage, all three of us in one piece, at about 9:00 pm, and this time I did have a drink!

The next challenge was to get her a UK registration.
I knew from its history file prepared by the AS historian Penn Bradley that the car had been shipped to Australia in the 1950s and had been restored in the 1990s by Fred and Trisha Jones, somewhere near Canberra. I managed to trace them, found a phone number and rang it…….. . . .
Fred, now in his 80’s, answered the phone and confirmed that he had indeed restored my car. I was able to tell him that Lady D had returned home. They were very pleased to talk and gave me much anecdotal information about her. In the conversation, I mentioned that I was trying to get the original registration number restored but was lacking sufficient evidence to link it to the car. The factory record shows that she was sold as a rolling chassis (for the Salmons Tickford body to be added) to a Miss Stella Caine, who, according to Penn became Lady Dorchester, hence the name of the car. Sadly, my own research shows that she didn’t acquire this title, but the name remains with the car.
Fred confirmed what the number was and said he had a photo of the car as it was when he first saw it, in a shed in Australia with its original UK number plate on the front (DTA 278). As if that wasn’t enough he also told me that he had kept the actual number plate and that it was hanging up in his garage. The photo was sent to me and just before Christmas, I received a surprise package containing the actual front plate. What a great Christmas present!
My first application to have DTA 278 reunited with the car was unsuccessful due to a lack of hard evidence, but after more digging and some dead-ends, I managed to get a copy of the Devon County Council Registration log showing that DTA 278 was issued to an Armstrong Siddeley cabriolet in December 1936 in Devon to a Miss Caine. This all matched with the factory record, although the chassis number wasn’t on the log entry so I resubmitted my application, still not certain if I had enough evidence but, in January, the DVLA accepted it. RESULT!
It should have been no surprise to find that the holes in the old front plate aligned exactly with the holes in the bumper, but when I fitted it, I got goosebumps, nonetheless!

October 2014 The Tiger has been granted an entry for the Tour Brittania next year, so preparation has… 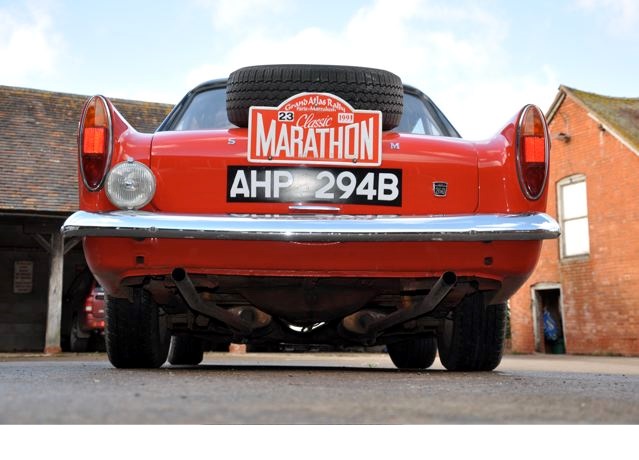 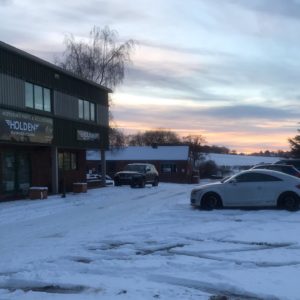 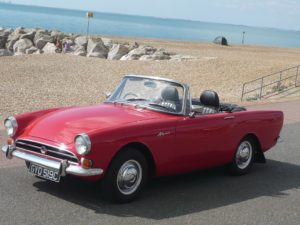