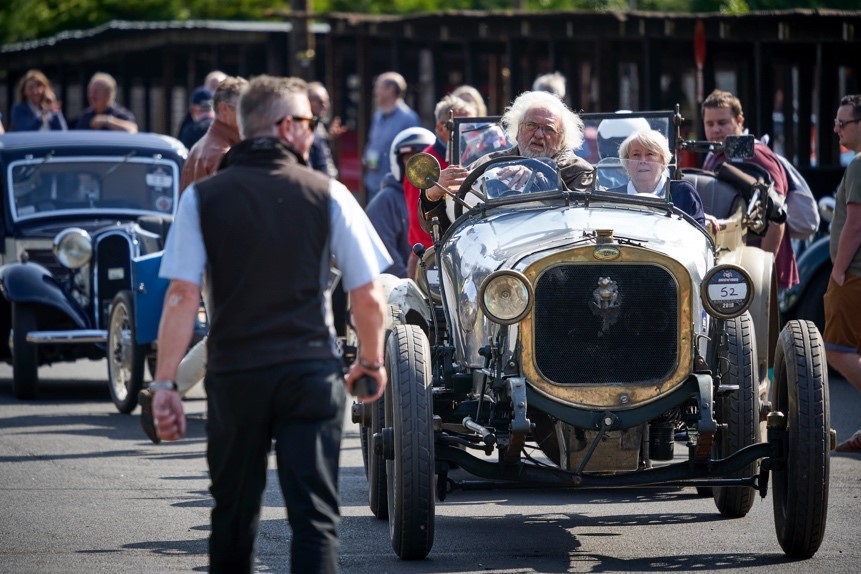 On Sunday 13th May Holden Morgan were proud to join thousands of classic car enthusiasts, owners and trade and club representatives at The Bromyard Speed Festival On Tour at Shelsley Walsh. Bromyard Speed Festival was founded in 2012 with the purpose of celebrating Bromyard’s rich motoring history which includes links with companies such as Morgan, Austin and Bean. Each year since, thousands have travelled from across the country to this picturesque town to view up close a number of fascinating motorcars spanning the decades. Those of you who attended in 2017 will remember The Beast of Turpin (among other landspeed record holders) thundering through Bromyard’s winding cobbled streets, the engine of which could be heard for miles. But what made 2018 a little different was that unlike previous years, the festival went on tour and took place at the historic Shelsley Walsh hill climb.

Shelsley Walsh is host to the oldest hillclimb in the world, dating back to 1905, and has accommodated continuous classic motoring events ever since. It was only fitting, therefore, that the speed festival should choose to go on tour at this location, where spectators could enjoy panoramic views of the 140+ classic cars in attendance, as well as refreshments, up-close viewing in the paddocks and the opportunity to meet motoring enthusiasts and professionals from across the country and beyond. The festivities began at 10am and we were fortunate to enjoy blue skies and warm weather throughout.

A particular highlight for the Holden Morgan team was the chance to drive and display the 1970 Plus 8 currently available for sale, a video of which you can view here.

This stunning Morgan was despatched from the Factory on 1st August 1970 via Basil Roy Ltd in London and was originally finished in yellow with black upholstery. The car has benefitted from a ground up rebuild by Main Agent Brands Hatch Morgans, has been fully prepared to FIA Appendix K specification for Period ‘G’ sports cars, and offers entry into some of the most prestigious historic Motorsports events, such as The Tour Auto, Tour Brittania and HSCC 70’s Roadsports series, where a +8 is a front running car. Whilst having been built first and foremost as a competition car, it has in no way compromised its tractability on the road. The gearbox, having been attended to by renowned Moss box experts JB Sports Engineering is precise, offering the quick change expected of a competition car, the handling and ride has been very carefully set up as the car holds the road superbly, better perhaps than expected on slightly bumpy roads, the ride quality far from the race track. The supportive seats suggest that this is a car not just for racing but also perfectly suited to a little high speed touring as well. For more information on the car’s specifications and history, click here.

Another Morgan proudly driven by Charlotte Holden was the Plus 4 Supersport. Also for sale at Holden Morgan, this beautifully finished car is one of only sixty of its kind. It features a carefully considered specification including an array of performance upgrades, track inspired accessories and fashionable sixties themed aesthetics. This truly versatile car promises all the reliability of the modern Morgan but with a large injection of legendary sixties racing spirit. If you’d like to view this car in person or arrange a test drive, you can contact Katie Turner on katie@holden.co.uk or click here for more information.

It was a pleasure to see some familiar faces at the event, including Granville Orange who recently purchased a three-wheeler from Holden Morgan (pictures below), which has received a stunning sheepskin interior makeover! We also had the pleasure of catching up with Stephen and Anne Massey who came in their beautiful Roadster. Katie Turner, General Manager for Holden Morgan, said, “Bromyard Speed Festival On Tour was a huge success and the entire Holden Morgan team and customers enjoyed themselves immensely. The day presented a unique opportunity to see some spirited driving against a beautiful backdrop and it’s clear from the attendance levels and reception that it was a treat for all who came. We look forward to supporting Bromyard Speed Festival again in 2019 when it is expected to return to Bromyard.”

If you have any questions about the Morgans for sale at Holden Morgan, please email katie@holden.co.uk. We look forward to seeing you again on 7th April next year!