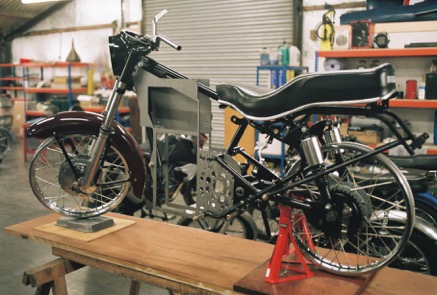 With the New Year now firmly underway, we called in to Spaven Engineering to see how their electric Royal Enfield project – The Charging Bullet – was coming along.
In spite of moving workshops over winter, work has not slowed on the project and the bike is coming together nicely. After a bit of a wait for the charger to arrive from China, all the main components were in the workshop by early December and the final design could be sketched out on a wooden board slotted into the original Enfield frame.
Over Christmas this design was drawn up on CAD before being printed out at 100% scale and re-inserted into the frame for adjustments. This process was repeated a few times until everything was exactly right before the drawing files were sent off to Hereford’s ACL Sheet Metal to be laser cut from sheet steel. Fred picked up these ‘engine plates’ and, due to the careful checks made with the printouts, they fit the frame perfectly. And just in time too, as last weekend was the first day’s ’shoot’. Freelance film maker Finn Varney has got wind of the project and is going to film the build process and subsequent ride from Land’s End to John O’Groats, to craft into a half-hour documentary on the electric transport revolution we are all watching unfold. The loosely assembled frame and parts provided the perfect starting point for the film.
We’ll call back in on Fred soon to see how he’s getting on fabricating the rest of the subframe and wiring up the main components into a working bike ahead of the big trip. For more regular updates, check out the project’s dedicated blog: charging-bullet.co.uk